By Eberhard Felsmann
Past Chairman and Breed Warden, VDD-Group Canada

What is a Bringselverweiser or, freely translated, a “dead game guide”? It is a dog who has been trained to guide his handler to the carcass of dead game. The training of a Bringselverweiser is not difficult and you will be amazed at how fast the dog catches on.

There are basically two ways in which the dog can be trained to guide his handler. Some prefer to let the dog go continuously back and forth between handler and game until the handler arrives at the deer. I use a different, less tiresome way for the dog. I let the dog go ahead of me at a pace that I can follow, keeping visual contact. If the dog advances too far or gets out of sight due to brush, I just stand still and let the dog come back looking for me. When I reach the deer, I kneel at the hide, touch it and accept the Bringsel from the dog. Then I praise him a lot and give him a good treat. Most dogs enjoy guiding. They happily run ahead, stop and wait for me to catch up and they act impatient almost as if they were saying, “Hurry up old man, I found it!”

Since Bringselverweisen is based on retrieving, a dog should first have completed its retrieving training before it can be successfully trained to be a Bringselverweiser. All of my dogs have been ‘retrieving nuts’, but I ignored this during the formal training and took them through force retrieve training. Experience from my younger years has taught me that anything else will backfire, if not sooner, then at a test.

The guiding as such goes hand in hand with blood tracking, but I would recommend that only in the final stages of training should you use Bringselverweisen as an extension of blood tracking.

To start training you need a Bringsel—the gadget to be attached to the dog’s collar—and a deer hide, preferably a stuffed one since this better resembles the shape of a deer. The Bringsel can be made from narrow but thick pieces of leather. A practical size that is easy to carry but does
not hinder the dog is approximately 4½-6 inches long, ½-¾ inches wide, and about ½ inch thick, with a snap at one end in order to easily attach it to the collar ring.

My first step is to acquaint the dog with the Bringsel so that he recognizes it as the retrieving object. I throw it a short distance three to four times and let him retrieve it every time, requiring that he sit and properly deliver it to hand.

From here on, the only place where the dog will find the Bringsel will be at the stuffed deer hide. I first put the dog on SIT and STAY. I take the hide and place it about 10 feet in front of the dog and lay the Bringsel on top of the hide, while the dog observes what I am doing. I then take the dog on the leash, walk with him to the hide and command, “FETCH—FIND THE BUCK!” The reason that I put the dog on the leash is to have the possibility to immediately prevent pick up of the hide instead of the Bringsel. If the dog tries, I say “NO!” and then point to the Bringsel and  make him understand that is what I want, not the hide. If persistent problems should occur, the stuffed hide can be tied down or a flat hide could be nailed to a piece of plywood to prevent the dog from picking it up. I repeat this exercise until the dog understands that I want the Bringsel and not the hide.

Usually most dogs perform in a short time and I move to the next step where I attach the Bringsel to the dog’s collar. Depending on how alert a dog is, the Bringsel can be attached right away by it’s snap to the dog’s collar. As an alternative, a piece of string can be used as a temporary extension. The string should be just long enough so that the Bringsel hangs down in front of the dog’s chest. Now, again I let the dog wait in a sitting position, walk ahead and place the hide about 20 feet or so away. I return to the dog, assure that he faces the direction of the hide and command FIND THE BUCK. As an aid I point in the direction of the hide. The dog will run to the hide and look for the Bringsel. When he does this and lowers his head, the Bringsel (which he wears temporarily on the string extension) will come to rest on the hide or dangle conspicuously in front of his fang. I never encounter difficulties here and the dog always grabbed the Bringsel.

One must be aware from now on that some dogs, once they realize the Bringsel does hang on their collar, are inclined to pick it up too early (before they go to the hide). Immediate action is then necessary. I detach the Bringsel from the dog’s collar and place it on the hide before I send the dog. What the dog must learn is that he is not allowed to pick up the Bringsel before he is at the deer. If it happens again, I say “NO!” and pull the Bringsel out of his fang and send him with FIND THE BUCK back to the hide. This training is no different from any other training and if a dog fails, I always go back to the step he understands (the foundation) and advance again from there, adjusting the pace of
progress to the dog’s learning ability. When the dog performs well with the extended Bringsel, I end the lesson on a positive note.

Next day (or if I started training in the morning, then on the same day in the afternoon) I resume my training. Since I am still in the process of laying the foundation, I start again by placing the Bringsel on top of the hide. My main concern is to make the dog understand that only at the deer can he pick up the Bringsel. This is most important. If one would be impatient here, continuous problems could arise and the dog could try again to pick up the Bringsel before he gets to the hide.

Next I again attach the Bringsel to the collar with a string and go through the exercise a couple of times. Then I start to shorten the string until I reach the point that the dog shows no problem in picking up the Bringsel when it is attached by just the snap. Soon the dog develops his headswinging technique and he flings the Bringsel into his fang without a problem.

From here on I work with the dog almost on a daily basis, gradually increasing the distance to the hide. A farm lane works well here. Once the dog works well over a distance of 200 feet or so, I change from open fields to cover. Since the dog cannot see me placing the hide, I send him on my track. Important to remember: If problems arise, go back to the prior step and advance again.

The first dog I trained as a Bringselverweiser was my first dog, a DD. I sold the dog fast because the new owner was so impressed with the dog’s (theoretical) performance, but to my knowledge the dog was never used in a real hunting situation. My second dog, a DK named Pruehs Alk, was also trained as a dead game guide. I sold him to a ‘land baron’ farmer. Shortly after I sold him, this dog performed perfectly and made possible the recovery of a fallow deer stag over a distance of almost one kilometre.

My DD bitch Alfa v. Ramgadhof was the first dog ever to be tested as a Bringselverweiser in North America—at a VGP in Missouri—and she performed reliably, like a Swiss clock. Interestingly, after the initial training with the deer hide, I used deer-coloured goats to complete
the training with this dog. After passing the VGP she was used as a brood bitch and I never again practiced Bringselverweisen with her. Three or four years after the test, a colleague from work had wounded a deer and asked me to try finding it with my dog. Well, we did not find it,
so I decided to polish her up with the use of a deer hide. To my surprise, the dog that had never failed a couple of years before seemed to have forgotten everything about Bringsel training. The lesson to be learned for me was that dead game guiding needs to be practiced once in a while to have a dog ready when it is needed.

I was told that the German Army used Bringselverweisen during World War I to recover wounded soldiers from the battlefield. Obviously hunters or dog trainers saw the possibility to adapt that system for hunting dogs to locate dead or wounded big game. I believe strongly that
the motivation to train a dog to be a Bringselverweiser should not be a few more points to be picked up at a VGP. It has to be to recover wounded or dead game!

Bringselverweisen training is easy and fun, both for you and the dog. Get started. Happy training!

Training for the Drags 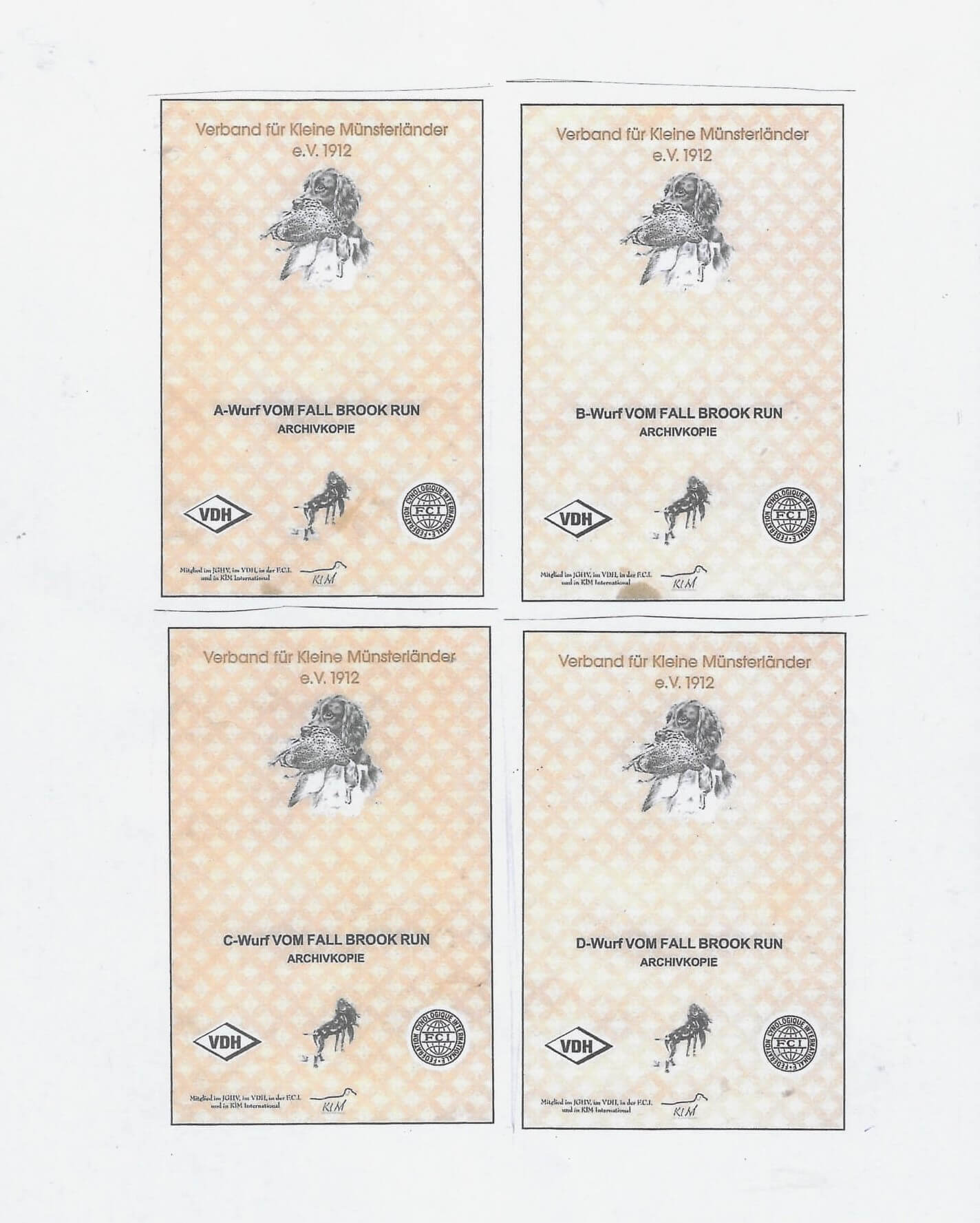